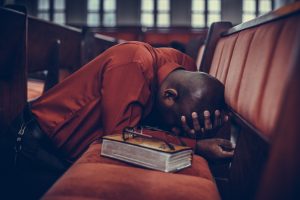 There are a couple of people in scripture who had absolutely unenviable ministries. For real.

How many of us would sign-up to deliver God’s message to people that God flat-out told us would never listen? Enter the prophet Jeremiah. (Jer. 7:27) The people were so grateful that Jewish tradition says they stoned him to death.

Tradition says that Isaiah was sawn in two.

Ezekiel had to lay on his side in the hot son for weeks on end and eat food cooked over manure in order to get God’s message to the people. They didn’t listen either.

In other words, God was not discounting the challenge of the thing He was asking Ezekiel to do. It would be hard. He was promising Ezekiel that He would make Him strong enough to do it.

Sometimes you and I will face situations that are not what we would hope for. Sometimes they will be unthinkable. God would say the same thing to us that He said to Ezekiel. He will give us everything that we need to come out the other side with our faith intact and enough spiritual fruit to make it worth it.

Previous StoryPeople Are the Whole Point (Lamentations) Next StoryIt Can Be Done! (Daniel 1)