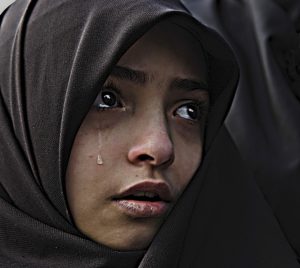 The entire book of Judges portrays a nation rotting from the inside and the last few chapters record the most horrifying story conceivable. Tragically, the narrative sounds like something that we might hear from modern day Boko Haram or ISIS, not from God’s chosen people. At this point in history the Israelites had moved themselves so far from God that “right” and “wrong” were no longer measures of morality, as “everyone did what was right in his own eyes (Judges 21:25).” It is a disgusting sight and a warning to every other nation.

The story begins with a Levite and his concubine and that right there tells us a lot. Levites were the tribe set aside as ministers and examples of holiness among the people. A concubine is a woman or girl held as a slave for sex. Those two things should never have gone together. Israel’s depravity had become so deep that even ministers were behaving in sickening ways.
One day this concubine ran away from her master back to her father’s house. The NIV says that she was “unfaithful”, the NKJV says that she “played the harlot”. However, this does not mean that she had the kind of affair that we might think of as marital unfaithfulness.

According to the New American Commentary; “If the Hebrew text is going to be taken at face value, she seems simply to have abandoned her husband, perhaps because she was tired of being treated as a secondary wife, and returned to her father’s house. She may have been designated a prostitute simply because she walked out on her husband.” Further it says, “We should not be surprised if, when she returned home, her father sent her out to work as a prostitute to contribute to the family income.”
Eventually the Levite found her at her father’s house and attempted to take her back. This began a bazaar situation where the Eastern hospitality of the girl’s father intersected the Levite’s desire to get himself and his concubine back home and they ended up leaving much later in the day that they should have.

It was late in the evening when the small party finally found a place to stay. They were taken in by an “old man” where the men began to “enjoy themselves”. At this point it is important to remember that nothing that happened was sanctioned by God, it is recorded as history. A group of men from the city came to the house where they were staying and demanded that the old man send the Levite out for them to have sex with.

As the mob grew angrier, the Levite seized his concubine and thrust her out of the house like a piece of meat to a pack of wild dogs. Then the men of the house went to bed.

The men of the city gang raped this poor, defenseless girl until morning. Lest we become confused about God’s opinion of this situation, the Bible calls the rapists “sons of Belial” which, according to our commentary is, “a virtual synonym for ‘Satan’.” This was pure evil in the strongest sense of the word.

In the morning the Levite got up and opened the door. His intent was not to look for his concubine and see to her healing, it was to “continue on his way (v. 27).” He found her laying on the threshold of the house reaching with her arms for the protection of the home, her husband, her host…anyone who could help her! No one came to her rescue. Without an ounce of compassion, the Levite commanded her, “Get up and let us be going (vs. 28)”. There was no answer. The multiple rapes had been so violent that they had actually killed her! And he slept right through her cries for help.

As the chapter concludes, the divinely inspired narrator gives a desperate appeal to his readers, “Think about her! Consider it! Speak up! (vs. 30).”

We live in an increasingly wicked time. Never in history have we been more aware of evil and suffering in our own communities and around the world. Did you know that there are more human slaves right this very moment than there has ever been at any other time in history? Many more suffer in other ways. This appeal is for us as well! We cannot shut our doors to their cries and pretend it is not happening. When it is in our power to act, we must.

Philippians 2:4 exhorts us, “Let each of you look not only to his own interests, but also to the interests of others.” We must think, consider and speak up!