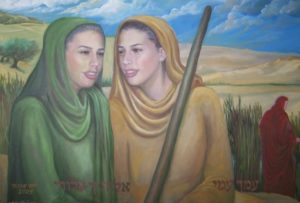 Naomi and Elimelech were young parents when a famine struck their hometown of Bethlehem. In ancient times, famines were no joke.  Entire people groups could be wiped out, and dying of starvation is not a pleasant way to go.  It would be impossible to overstate how frightening a famine would have been to Elimelech and Naomi, especially because of their children.

Naomi and Elimelech’s sons were named Mahlon and Kilion. In a time when the meaning of your name was significant, these boy’s names meant: “Sickly” or “To be weak” and “Failing”, “Pining” or even “Annialation”.  It is universally accepted by scholars that these name choices described them.  They were likely unhealthy and physically weak from the very beginning of their lives.

We had a huge scare after the birth of our son.  He spent his first nine days in the NICU of our hospital barely holding on to life.  It was terrifying!  It also made the mother grizzly in me come roaring out.  On about the third day of our son being in the NICU (and me not sleeping a second), with doctors unable to tell us if he was going to live or not, I remember sitting next to my tiny, unmoving son in an incubator with an oxygen mask helping him shallowly breath.  I had not even been able to hold him yet and he had about 13 things strapped to him, or poked in him, or jammed down his throat.  A young nurse came over and wanted me to sign a form authorizing a Hepatitis vaccine.  I let her know, in no uncertain terms, that if she stabbed my baby one more time, for anything that was not a necessity to his life right then, she would lose a hand.

We can imagine that having unhealthy, weak children made Elimelech and Naomi even more territorial and protective of them.  While stronger children may have been in a better physical position to ride out a drought, it may have been a risk that Elimelech and Naomi were just not willing to take.  They packed up their family and moved to the neighboring country of Moab.

Elimelech and Naomi’s decision was based on a noble need to protect their family. Despite their best efforts, however, as the years passed and their sons grew and married, tragedy struck their family again, and then again, and then again. In five short verses in the first chapter of Ruth, death wipes all of the men off of the scene leaving us with a trio of grieving widows. After unprecedented loss, Naomi becomes the female version of Job in our scriptures and it was time to go home.

Naomi has two problems- her daughter’s-in-law. Not only was she not able to care for them, she could barely keep herself together at this point, but they were not exactly the kind of women that she could take with her back to Israel. To do so would be to admit total failure as a good Jewish mother. Her sons had married foreign, pagan-worshiping women.

According to Carolyn Curtis James: “In ancient culture, father’s typically negotiated arranged marriages, usually with an eye toward foraging advantageous relationships with other families. The narrator omits the details, but we already know that in addition to the drawbacks of their immigrant status and the absence of a father, Naomi and her sons were without land, wealth, or other assets that might attract a Moabite family’s interest. Fathers in Moab’s high society would not be inclined to marry off their daughters to the likes of Mahlon and Kilion. It is difficult to argue that the brides Naomi’s sons took for themselves were the cream of the crop of Moabite women.”

As she began her journey back to Israel, Naomi urged Ruth and Orpah to go back to both their homes and their gods. Orpah’s common sense eventually led her back to her father’s house, but for Ruth, it wasn’t even a question. Carolyn Curtis James writes, “Despite Naomi’s urgings, at its core, this choice is not about geography, family loyalty, or the future. This decision is about God.” Ruth chose to follow God.

Ruth’s choice was bold! She was walking into a more uncertain future than we can imagine, and what an example she is to us. “Ruth stands out among all of the biblical narratives as a powerful example of a person whose faith in God emboldens her with stunning courage. She gives us one of the strongest examples in all of Scripture of faith in action and, as future scenes will show, a risk-it-all determination to live as a child of God (Curtis James).” I want to be like Ruth, don’t you?

Previous StoryThink, Consider, Speak Up! (Judges 19–The Levite’s Concubine) Next StoryUntil There is an Answer (1 Samuel 1–Hannah)