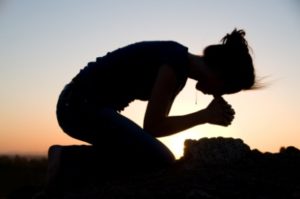 The Wikipedia definition of an “idiot” is this: “An idiot is a person perceived to be lacking intelligence, or someone who acts in a self-defeating or significantly counterproductive way.” After this week’s scripture reading we might define “idiot” as: ”Samson”.

Just when we think that Samson’s parents were so wise and godly that their child would naturally follow them in godly wisdom, we read the rest of the story. As far as we know, Samson’s parents were solid people who did the best they could to raise their child to love and honor God with his life and special gift of strength, yet Samson struggled continually with his lust for Philistine women. First there was a wife, then a prostitute and then his lover Delilah. (Just reading that story makes me want to bang my head against a wall. How could one man fall for the same thing over and over again?!?)

It’s enough to make a mother want to cry! As Samson spent his days grinding grain, a bald, blinded prisoner of Israel’s enemy, I wonder how many nights his mother tossed and turned wondering where she went wrong. How had her son, who had so much promise that the Angel of the Lord Himself had announced his arrival, ended up this way? How could he have squandered such an amazing gift? Were all of those years that she spent teaching him about the Nazarite vow, monitoring every morsel of food or drink that went into his mouth, and praying over him been wasted? You might be wondering the same kind of thing about one of your children right now.

One Sunday evening I was volunteering in the church nursery along with the wife of one of our pastors. She began to tell me about her young adult daughter who was really struggling. With a far-off look in her eye she said, “She is so far from God right now.” I know this mother. She and her husband love Jesus more than anything in the world. They have spent their entire adult lives in ministry. They are fantastic, involved parents. They did everything possible to lead their children to Christ. How could this have happened? What happened to, “Train up a child in the way he should go and when he is old he will not depart from it (Prov. 22:6)?”

I told her what I am telling you now if you find yourself in the same place. There is nothing more powerful than a praying mother. I have seen with my own eyes individuals who created disasters of their lives for decades and were so far gone that it seemed impossible that they could ever change, surrender to Jesus and completely turn their lives around. Invariably, when that person is telling their story they will say, “my mom was praying for me all those years.”

It would have been tragic if Samson had died in that prison, but he didn’t. As his hair began to grow, so did his relationship with God. His life ended with a greater victory than any he had had in his entire life and it was to the great glory of his God. It can happen that way with us and with our loved ones as well. God has a way of getting the last word if we let Him. Never stop praying