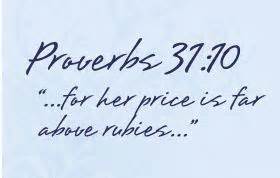 What a complicated relationship we have with the Proverbs 31 woman, don’t we? We name ministries after her, read books titled, “How to Become a Proverbs 31 Woman”, write blog posts about her, and receive ads on Facebook to join “Club 31” in her honor. On one hand we want to be like her so badly, and on the other her qualities seem so out of reach that we fear we will never measure up to her and if we don’t, have we failed as Christian women?

Proverbs 31 is titled, “The Words of King Lemuel’s Mother.” This proverb wasn’t meant to be a checklist for Christian women as a measure of our worthiness. If it was, we would all be expected to have servants (vs 15), wear expensive clothes (22), and work outside our homes (vs. 16, 24). It was godly wisdom from a good mother to her son. Ancient Jewish tradition states that King Lemuel was, in fact, King Solomon, in which case, this godly advice would have come from his mother, Bathsheba.

Assuming that it was actually Bathsheba giving advice to Solomon explains a lot. “Listen, my son!” she begs. “Do not spend your strength on women, your vigor to those who ruin kings (vs. 3).” Bathsheba watched her son marry woman after woman after woman (700 in all and 300 concubines according to 1 Kings 11:3) and noticed that having so many wives was not good for him or the kingdom.

Besides the fact that God only intended marriage to be between one man and one woman and every example of polygamy in scripture shows absolute disaster, many of these women were foreign princesses who brought their idol worship with them when they married her son. First Kings 11:4 says, “For it was so, when Solomon was old, that his wives turned his heart after other gods; and his heart was not loyal to the Lord his God.” His mother saw this tragedy coming and warned against it.

Bathsheba also understood that her son was marrying for all of the wrong reasons. In that culture, men in power, as Solomon certainly was, married for exactly two reasons; beauty and more power. Each time that he married a princess from another country it meant some sort of political alliance with that country. In Proverbs 31, Bathsheba states quite clearly to her son that women are more than property. A good wife is, in fact, “more priceless than rubies (vs. 10).” This thought would not have naturally occurred to him in his situation.

To prove her point, Bathsheba made a list of all of the honorable and worthy things that women do that their husbands might not notice. For example, while he is sleeping, she is up early starting breakfast for her family (vs. 15), not to mention all of the years that she was up all night with babies! Her family doesn’t have to worry about clothes as the seasons change because she has already done the shopping and when the weather turns cold, they will open their closets to find warm winter coats (vs. 21). While others might ignore those less fortunate around them, this mother is finding ways to make a difference (vs. 20). Without this kind of industrious and capable woman, the family and community would fall apart in a hurry!

Far from being a check-list for us, the Proverbs 31 wife is an ode to what good women are already doing; from a mother to her son. It is a reminder that this kind of woman is precious. She is worthy of notice and praise from her husband (vs. 28-31).