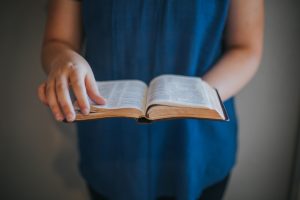 Did you know that 66% of Americans say that they want to know more about what the Bible says? That’s fantastic news, and here’s why. Scripture has the power to change everything.

In Second Kings 22, Judah was a royal mess. One evil king after another, people worshiping idols and sacrificing their children on alters to them (2 Kings 23:10), male cult prostitution in temples (23:7) and every kind of sin imaginable. God had finally had enough and was about to bring the hammer down hard when something interesting happened.

During the construction project, the high priest found a copy of the scriptures. He took them to King Josiah, who had them read to him. What he heard, brought the king to repentance. He was so concerned that He sent for the prophetess Huldah to see what they should do about what he had read.

The prophetess Huldah told him that because his “heart was tender” and he had “humbled himself before the Lord” (22:19) because of what he had heard, that God would have mercy on the entire nation.

King Josiah knew that he couldn’t keep the truth to himself. He gathered “all the people from the youngest to the oldest” (23:2) and had the entirety of the Scriptures read aloud! In front of the entire nation, King Josiah made a covenant with God that he would obey the Lord. The people followed his lead and also repented and promised to follow the Lord.

All this happened because someone found, read, obeyed and shared the scriptures.

The Bible has the power to change everything for us to! When we humble ourselves before the Lord and open the Scriptures with a tender heart, there is no telling how far our spiritual transformation will reach.