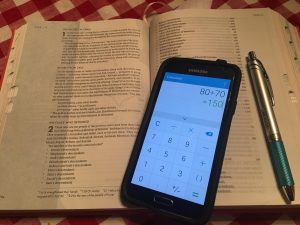 Math isn’t usually my thing. (I’d rather scrub the bathroom than help my seventh grader with her math homework.) However, math in the Bible will blow your mind! Check this out.

The book of Ezra opens with these words: “In the first year of King Cyrus of Persia, in order to fulfill the word of the Lord spoken through Jeremiah, the Lord roused the spirit of King Cyrus to issue a proclamation throughout his entire kingdom and to put it in writing.” (Ezra 1:1)

What King Cyrus did in that decree was unheard of! The Jewish people had been dispersed in his kingdom for seven decades. Though they came as spoils of war, the Jewish people did not remain that way. They were working, paying taxes, contributing to society and were very numerous. In his very first year reigning as king, Cyrus told any Jewish person who wanted to go home to Jerusalem that they were free to do so. No strings attached.

It’s unbelievable! But what’s even crazier is that more than 150 years before King Cyrus was a twinkle in his daddy’s eye, God said that he would do this exact thing and to ensure that there was no confusion, God used Cyrus’s name. (Isaiah 45:1)

To recap: 80 years before Judah went into captivity, God said they would go to Babylon as captives, but that after their prescribed 70 years of punishment another superpower (which wasn’t even on the global radar as a superpower at the time) would defeat their captors and that a king named Cyrus, who wouldn’t be born for 150 years would then free them.

If that math lesson doesn’t increase your faith in God and His Word, I don’t know what will. (And that was more fun than cleaning the bathroom wasn’t it?)