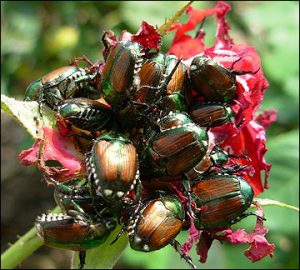 Every summer while our family lived in the South, I went to battle against my arch rival- the Japanese Beetle. These obnoxious little critters appeared en masse one day each July and decimated my green bean crop, shredded my roses and generally wreaked havoc on my garden. I loath them.

While researching how to control my mortal enemy, I found out something interesting. The Japanese Beetle is called the “Japanese” Beetle because it hails from the country of Japan. (I just blew your mind, didn’t I?)

Some of these beetles caught a ride on some nursery plants and ended up in New Jersey. In Japan, this particular beetle is not a big problem because it has natural enemies that keep its population in check. However, since there are no natural predators for them in North America, they do nothing but eat plants and multiply exponentially.

Here in the States, the Department of Agriculture describes them as a “serious threat” to agriculture. Nearly every state has a program to study the Japanese Beetle and find effective ways to combat them.

It occurred to me how ironic it is that this serious threat to our food supply isn’t even supposed to be in our country.

In First Kings 16, we are introduced to King Ahab and his notorious queen, Jezebel. Just her name is enough to put a shiver down our spine and with good reason. She was dreadful! She killed the prophets of God, tried to stamp out Jehovah worship in Israel, she was conniving and manipulative, she imported prophets of the idol Baal and taught the people to worship him and his sister/wife Asherah. (This included child sacrifice.) There is not a redeeming quality about this woman. She was a serous threat to the people of Israel.

And she wasn’t even supposed to be in their country.

When King Ahab married Jezebel it seemed like a good move on paper. She was a Sidonian princess. He and her father were negotiating peace between their two countries in which the Sidonians would have access to the King’s Highway in Israel and the Israelites would have the opportunity to purchase unique goods from the Sidonians. It seemed like a win-win situation.

However, God had specifically instructed the Israelite’s not to intermarry with their pagan neighbors. When Ahab did, he allowed a threat to enter his country that never should have been there.

Ephesians 4:27 instructs us not to give the devil a foothold in our lives. That means that we shouldn’t even play around with things that God specifically tells us are going to be bad for us and our relationship with Him. It never, ever works out well. If we do, we will find that we will have to spend an exorbitant amount of energy trying to manage the thing that never should have been there in the first place.