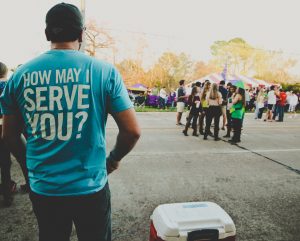 I grew up with a family whose father demanded complete respect at all times. He made every decision in their house.

To prove his absolute authority, this man created rules that applied to one child but not another. His rules were subject to change without notice. What was acceptable one day might not be acceptable the next. No one was allowed to voice an opinion that differed from his. He was, after all, the head of their home.

Because his family was well-trained to obey him, he assumed that he had their respect. He was shocked, however, when each of his children left home the second they had the opportunity and got as far away from him as they could. Sadly, this father had earned his family’s obedience for a season, but had lost their hearts forever.

Something similar happened in scripture.

When King Solomon died, his son Rehoboam took his place as king. At the beginning of his reign, the people came to King Rehoboam and explained that his father had taxed them too heavily and asked the new king to reduce their taxes. (King Solomon built Israel’s first temple, which was opulent by any standard. He also built his own palace that was so enormous that it actually took twice the amount of time to build than the temple. All of this cost money and Solomon’s money came from taxes. With 700 wives, 300 concubines and who knows how many children, Solomon’s household was an expensive one to maintain. Again, the Israelite taxpayers were footing the bill.)

King Rehoboam took the people’s complaints under advisement for three days while he asked his advisers what to do. The older advisers said, “Today if you will be a servant to the people and serve them, and if you respond to them by speaking kind words to them, they will be your servants forever.” (1 Kings 12:7)

Did you notice what they said? They said, “Serve your people. Be kind to them. If you do this, they will love you and follow you anywhere.” That’s good advice for us in whatever spaces of authority that we find ourselves in. If we seek to serve others and be kind, others will be happy to follow our lead.

King Rehoboam’s younger advisers took the opposite approach. They advised him to lay the hammer down on the people. He took their advice and it was the beginning of the end for him. The people had no respect for him. They didn’t like him. It split their kingdom.

If we want to be followed, not just obeyed, in our homes, workplaces, schools, and churches, we would do well to take this portion of scripture seriously. The way to lead with efficacy is to serve- just like Jesus did when He washed His disciple’s feet.