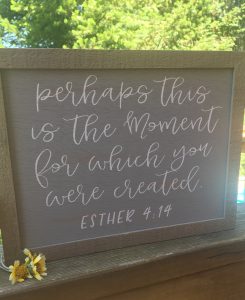 It is chilling indeed when a leader loses touch with the people he or she is leading. When that leader is the monarch of an enormous kingdom, it is downright petrifying!

This is the exact situation that we encounter in Esther chapter four.

The third chapter of the book of Esther closes with some ominous words. After King Xerxes had agreed with his right-hand man, Haman, to exterminate the entire Jewish population in the kingdom, “The couriers went out, hastened by the king’s command; and the decree was proclaimed in Shushan the citadel. So the king and Haman sat down to drink, but the city of Shusan was perplexed.” (vs. 14 and 15)

Let that sink in. The king and Haman had just agreed to kill countless numbers of defenseless people- then they sat down to drink.

While Haman and the king were drinking, the city was in shock. To have a government so disengaged from its people is terrifying. “And in every province where the king’s command and decree arrived, there was great mourning among the Jews, with fasting, weeping, and wailing; and many lay in sackcloth and ashes.” (Esther 4:3)

Many times, Mordecai must have wondered why God had allowed his precious Esther to be taken from his home and forced to marry a pagan king. In this moment, it became clear. “Perhaps,” he told her, “you have come to the kingdom for such a time as this.” (4:14)

It was a hard thing that Mordecai asked her to do- she would fall on the mercy of her husband even thought it threatened her very life.

So often we are called to do the right thing because it is the right thing, and not because it is the easy thing. Ministry is usually an inconvenience at best. Stopping to encourage an overwhelmed mom will take time, investing in a struggling couple’s marriage may mean teary phone calls in the middle of the night, those kids in children’s church never say “thank you”, passing out sandwiches to homeless people in the park in January is cold, sponsoring a child in the developing world will cost money, committing to pray in the morning will cost us some sleep.

We can decide that our calling costs too much. But if we do, we should remember what Mordecai told Queen Esther. “If you remain completely silent at this time, relief and deliverance will arise for the Jews from another place, but you and your father’s house will perish.” God’s will is going to happen with or without us, but if we give up our part in it, we will miss something priceless! Let’s not miss out.