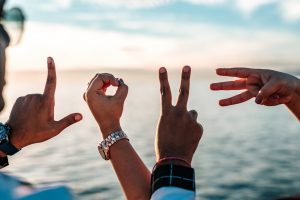 If there is such a thing as an “easy” marriage (which I doubt), my husband and I did not get one.

Like every marriage, our success hinges on both of us putting in a tremendous amount of effort. Do you want to know the truth? Sometimes its hard to want to keep working.

During a particularly lengthy season of difficulty, I was exhausted. Emotionally, physically, spiritually, just exhausted. I began wondering if all of this work and effort was really worth it. During this time God, quite unexpectedly, led me to a verse in the book of Esther.

You might remember the scene. King Xerxes had given an elaborate week-long banquet. By the king’s command, each guest was to be served as much alcohol as he wanted. You can imagine the condition of the king and his party-goers. “On the seventh day, when King Xerxes was in high spirits from wine,” (drunker than a skunk, as my mother might say) the king ordered his wife, Queen Vashti, to come and dance in front of everyone.

The queen certainly knew the penalty for disobeying her husband, particularly in such a public setting, but she just couldn’t bring herself to be ogled by a party full of rich, drunk men. It was the end of her.

The king unceremoniously banished his queen to the cheers of all his male advisors.

But a few verses later, we read something important. “Later when the anger of King Xerxes had subsided, he remembered Vashti.” (Esther 2:1)

I get the feeling that he missed her. Maybe he even regretted the decision that he made in a drunken, emotionally driven stupor. King Xerxes certainly had a very full haram, he wasn’t lonely for “female companionship” shall we say.

He missed his wife.

As I read that verse in my exhausted state, it was as if God was reminding me to keep working on my marriage. It was worth it. My family was worth it. There would be a heavy price to pay in the long-run if I stopped. Maybe God is reminding you of that too.