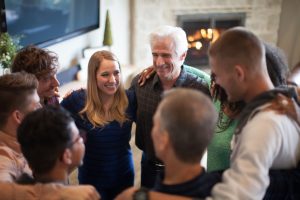 I recently had a conversation with a woman who was devastated that her niece, whom she had not bothered to see more than a handful of times, and had no real relationship with, was not enthusiastically taking her advice on dating and marriage, now that the aunt had all of a sudden decided to jump into this young woman’s life. I told her the truth: you have to earn the right to influence someone.

As followers of Christ, we can’t expect to have any kind of influence in the world, if we haven’t done the work and preparation necessary to become people of influence. Queen Esther, from the Bible, understood this principle perfectly.

King Xerxes was, in all likelihood, stunned when he looked up from his throne one day to see Esther standing in the entrance of his royal courtyard. As she stood there, she was dazzling in her royal robes and crown. She was not just beautiful. Not just his wife. From where Xerxes sat, she could not be mistaken for anything other than what she was: The Queen of Persia. He was impressed.

He was so mesmerized by her that his first words promised to give her anything that she wanted, even half of his kingdom! What she wanted was the life of her nation, and she got it.

But, Esther didn’t receive this success out of the blue. She stood in that courtroom completely prepared for victory. She didn’t just receive her husband’s favor on that day; she earned it.

In the three days previous to that fateful moment in the courtroom, Esther had made sure that she was spiritually prepared for success by having her entire nation fasting on her behalf. She had mentally prepared by making sure that she was armed with all of the facts concerning the situation that she and her people were facing. She put herself in the place of the person whom she was desperate to influence (her husband, the king) and met his needs. Finally, she dressed for success.

When King Xerxes received the queen on that day, he was willing to hear what she had to say and to give her what she needed because she had made herself worthy of her influence.

As Christians, we would do well to learn from the queen. If we want to earn the right to speak eternal life into others, we will have to invest in them. We must be spiritually prepared, mentally prepared. We must consider things from their perspective and meet their needs. We will have to work hard to build and maintain relationships. All of this will take time and intentionality, but if we do it well, our investment in people will yield great spiritual victories.