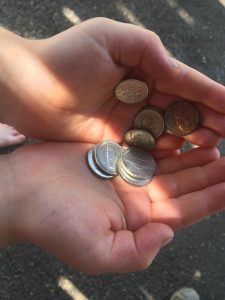 My son and oldest daughter clearly have the spiritual gift of giving. Even before they could write “thank you” notes by themselves, their grandparents would open notes from the kids to find a scribbled picture and 17 cents in change in thanks for a birthday or Christmas gift.

I once got an end-of-year tax deduction statement from a church that we had visited for $1.36, which my daughter had apparently put in the offering. Once, when our church was collecting money for our local crisis pregnancy center, I was impressed to find that my children had, in one day, managed to fill an entire baby bottle with change for the ministry. Until I realized that they had simply emptied my change jar into it. (We had a talk about how only the government gets away with being generous with other people’s money.)

The apostle Paul had a lot to say to the Corinthian church about being generous with their money. He was thrilled to report that the Macedonian church was doing well in this area. “During a severe trial brought by affliction, their abundant joy and their extreme poverty overflowed into a wealth of generosity on their part. I can testify that, according to their ability and even beyond their ability, of their own accord, they begged us earnestly for the privilege of sharing in the ministry of the saints (2 Cor. 8:3-4).”

As Paul was preparing to collect an offering from the Corinthian church to aid the poor, he advised them to carefully consider how much they would give, to give a gift according to what they had (in other words, there was not an undue burden put on people who could not afford to give much), and to budget in such a way that when the time came for them to give, they would have something set aside.

Setting aside a margin of money in our budget for giving is an essential practice. If we fail to do this, when we see someone in need, we may long to help but be unable to do so because we just don’t have the money right then. “Finish the task,” Paul advises. “So that just as there was an eager desire, there may also be a completion, according to what you have.”

Paul also reminded the Corinthians of this spiritual principle: giving is a double blessing. “At the present time your surplus is available for their need, so that their abundance may in turn meet your need, in order that there might be equity (2 Corinthians 8:14).”

Giving doesn’t take something away from us without giving us something back in return. As Solomon wrote; “Whoever is kind to the poor lends to the Lord, and He will reward them for what they have done (Proverbs 19:17).” Let’s leave a margin in our budgets to “lend to the Lord.”