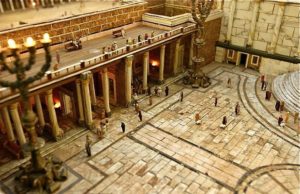 Just after His triumphal entry into Jerusalem, Jesus made a trip to the temple. This wasn’t unique for Him, in fact, the only story that we know about Jesus from His childhood was Him at the temple. This time, however, was different. He looked around and couldn’t stand what He saw for another minute.

The temple had been rebuilt completely or gone through major renovation six times since Solomon had built the original. This temple was built by Herod the Great. The temple at Jesus time was enormous! It took up a quarter of the entire Jerusalem city limits. To get an idea, it could accommodate 75,000 people at one time!

The temple that Solomon built had one major function. It allowed the priests to be in the presence of God on behalf of the people. For that reason, it only had one division. The people could be all around the temple, except in the Holy place and the Most Holy Place where only the priests could go at God approved times and in God approved ways.

Herod’s temple, on the other hand, had all kinds of divisions. There were various courtyards around it that were meant to keep certain people out. Any Jew or God-fearing Gentile could go into the first courtyard, but then the Gentiles could go no further. Jewish men and women could enter the next courtyard, but then the women could go no further. It went on and on in this way, excluding more and more people, until The Most Holy Place, where only one priest a year could go to meet with God. This was separated by a heavy, embroidered curtain.

The temple had its own security force and you could actually be killed for going into the wrong courtyard.

Mark 11:11 notes that on this day, Jesus, “looked around at everything.” He became livid! I wonder if one of the things that made Him so angry was the fact that His entire purpose on this earth was to make a way for people to go directly to God, and yet, the religious establishment had built this massive structure that literally served to keep people away from Him.

In only a few days, that massive curtain would be ripped top to bottom, and we would forever have access to God without any walls or curtains separating us. That is the beauty of Christianity! We must be careful to never put barriers in front of people that keep them from getting to God.

Previous StoryLooking with Love (Mark 10) Next StoryWhat a Waste! (Mark 14)