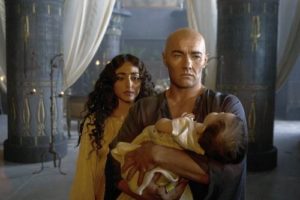 Bathsheba’s story is complicated, isn’t it? While there are many questions that we might like answered (was she David’s victim or accomplice in their adultery? How did she feel about her husband, Uriah? Uriah was listed as one of David’s famous “mighty men”. He was a close and loyal friend. How could David have done this to him?) the one that calls loudest to this mother’s heart is; did Bathsheba’s baby really die because of his father’s sins? That doesn’t seem fair! It also hits too close to home. I’ve had two miscarriages, were the deaths of my babies my fault?

It is clearly not God’s standard practice to punish parents by killing their children. There are times when unthinkable things happen that have nothing, whatsoever, to do with us. Job lost all 10 of his children, and God made it very clear that Job was so righteous that he could be used as the poster-boy for righteousness. If you have lost a child, please remember this!

In the case of Bathsheba and David, however, their son’s death was attached to David’s sin. Second Samuel 12:15 says, “And the Lord struck the child that Uriah’s wife bore to David, and it became ill.”

Having a baby die was not uncommon. In the ancient world, one in four babies died. (Can you imagine?!?) It is possible that with many wives and many pregnancies, David could have lost other children. This one was different. Nathan the prophet had told David that this child would not live while Bathsheba was still pregnant. When he was born ill, he and Bathsheba knew exactly why.

The good news for us is that when we repent, as David did, God forgives us and is gracious to us. Nothing could replace their lost child for David and Bathsheba, but God did bless them with another son, Solomon, whose name means; “restore” and “peace.” Bathsheba would surpass all of David’s wives to become the Queen mother when Solomon took the throne, making her the most powerful woman in the country at the time and her family line would lead to none other than the Messiah Himself. Bathsheba would tell us, “God can restore what is broken and change it into something amazing. All you need is faith. (Joel 2:25).” He can for you too.