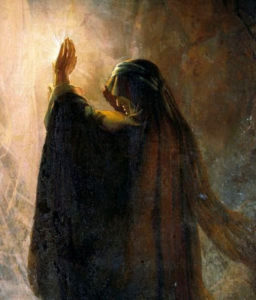 The only ghost story in the Bible is enough to make us ask; “What in the world?”

About this narrative, the famous story teller, Lord Byron, said, “I have always thought this the finest and most finished witch scene that ever was written or conceived, and you will be of my opinion if you consider all the circumstances of the actors of the case, together with the gravity, simplicity and density of the language. It beats all the ghost scenes I have ever read.”

King Saul was desperate. The Philistines were advancing and he had no idea what to do. In the Old Testament there were three basic ways that God spoke to people. He spoke through dreams, He used the Urim, and He spoke through prophets. Saul tried sleeping. Nothing. He couldn’t use the Urim- it was attached to the ephod worn by the high priest. At this point it was in David’s possession (1 Samuel 30:7). Samuel the prophet was dead and Saul was really beginning to re-think his choice to kill an entire town of prophets (1 Samuel 22) in a jealous rage.

As a last resort, King Saul decided to consult a witch. Though witches had been banned from Israel (1 Samuel 28:3) his servants apparently knew exactly where to find one. He disguised himself and under cover of night went to her. Here’s where the story gets really spooky…King Saul asked the witch to bring up the ghost of Samuel and apparently she did!

Scholars are divided on whether or not the thing that she saw was actually Samuel or if it was a demon posing as Samuel. Whatever it was, it shocked the witch so much that she screamed at the top of her voice. If the Hebrew text is taken literally, and because this spirit was able to accurately foretell the future, there is good reason to believe that it really was Samuel. How was this accomplished? I have no idea! Psalm 115:3 says, “Our God is in Heaven. He does whatever He pleases.”

God was silent when King Saul needed to hear from Him most. Have you felt that way? In Saul’s case, Isaiah 59:2 gives us a clue. “But your iniquities have separated you from your God; and your sins have hidden His face from you, so that He will not hear.”

God is merciful, but after a prolonged period of unrepentant wickedness He will effectively tell us, “Until we have dealt with this sin issue- you are on your own.” If we find that we can’t hear God, instead of turning to other things for advice, let’s make sure that our hearts are pure before Him.