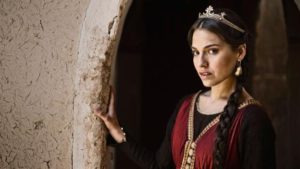 For many, Bathsheba’s story begins and ends with her affair with King David. Graciously, God did not end her story there. Bathsheba wasn’t just another wife in the King’s haram, David respected her and listened to her. He even promised her that their son, Solomon, would follow him on the throne, though he was not the oldest of David’s sons. (First Chronicles three lists Solomon as the tenth son of his official wives, not counting his concubines.)

As the book of First King’s opens with the very last days of King David’s life, we find our friend Bathsheba front and center in the narrative. We also see that Bathsheba had developed an unlikely friendship with the prophet Nathan. After dramatically confronting King David decades before about his sin of adultery, we find that Nathan did not hold Bathsheba’s past against her. When he needed a political ally, he knew that he could count on her. He wasn’t wrong. Bathsheba was wise, charming and effective.

There was a skirmish for the throne but when the dust settled, Solomon was on it and Bathsheba was the Queen Mother (the most powerful position that a woman could have at the time). Historians believe that Solomon reigned as co-regents for a year or two before David died. Bathsheba must have watched with mixed emotions as the crown moved from the head of her husband to that of her son.

We might have expected David’s throne to pass to the son of one of his more noble wives; Abigail, for example. But God is always doing the unexpected. David wrote Psalm 51 when repenting from his adulterous affair with Bathsheba. He begged God, “Make me hear joy and gladness, that the bones You have broken may rejoice (vs. 8)”. There is a price to pay for sin, but God always wants us to repent and then keep marching forward. Like Bathsheba, our story isn’t over until we stop breathing. God can make our brokenness turn to rejoicing.