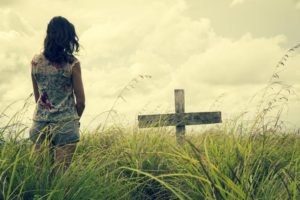 Did God kill Ezekiel’s wife as a morbid object lesson for the Jews living in Jerusalem? According to Ezekiel 24:16, God told Ezekiel, “Son of man, behold, I take away from you the delight of your eyes with one stroke; yet you shall neither mourn nor weep, nor shall your tears run down.” Without digging deeper, we might believe that God dealt cruelly with a man who was His faithful servant just to make a point. It might make us wonder if God would be cruel with us also.

God is not cruel. No matter how confusing life can be, we can each say this with certainty; “God is good and God is good to me.” Let’s get a little more context to this story.

First, Ezekiel’s wife was the “delight of his eyes.” Love was not the purpose of marriage in ancient Middle Eastern culture. When we get glimpses of couples who were truly happy it is a sweet thing.

Second, God told Ezekiel that his wife would be taken with “one blow.” According to The New American Commentary, “This usually described sudden death in battle or from plague or disease. Here it probably meant that she contracted some disease that was sudden and fatal.” Plagues and diseases were common in ancient times, and it is very probable that an epidemic may have ravaged the city and Ezekiel’s wife succumbed to it. She may not have been the only one to fall ill at this time.

It is entirely possible that Ezekiel’s wife was already sick at the time of his conversation with God and God was simply revealing to him that she would not recover. He may have been in prayer for her health when God spoke. If that were the case, it would explain how, with many people in the city in loud and obvious mourning for fallen loved ones, the prophet’s silence upon the death of his wife, would have stood out with such stark contrast.

To quote the New American Commentary; “The passage does not say that God put her to death as an object lesson. God would not arbitrarily take the life of Ezekiel’s wife to clarify His Word to an unrepentant people. But He would speak in the midst of the inevitable suffering of life to show them that He knows, He cares, and He will use the suffering as a basis for a hope of new life.”
Life is full of “inevitable suffering” for all of us sooner or later. That is, unfortunately, not a question. Jesus told us that in our world we will have trouble (John 16:33). The only question that will be put to us as we suffer will be, “How will we do it?”

In First Thessalonians 4:13, Paul says, “And now, dear brothers and sisters, we want you to know what will happen to the believers who have died so you will not grieve like people who have no hope.” In our grief, we can still have hope and that hope will anchor our soul (Hebrews 6:10) no matter what.

The people noticed how Ezekiel suffered and asked him, “Will you not tell us what these things signify to us, that you behave so (Ez. 24:19)?” When we grieve as though we still have hope in our God, people may ask us the same question. God wants to use every part of our lives, even the hard times. We just have to let Him do it.