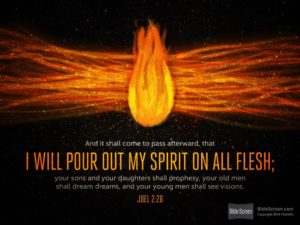 You may have never read the book of Joel, but if you have studied the New Testament you may have thought, “That sounds really familiar” when you did our reading in Joel this week. You would be right!

The book of Joel was written during an extreme crisis for God’s people. In it, Joel warned the people what would happen because of their wickedness, begged them to repent and then left them with the hope that in the future would come; “The Day of the Lord.”

In Acts two, we see the fulfillment of Joel’s prophesy and it is magnificent!

In Acts, God’s people were obediently waiting and praying together in Jerusalem when the Holy Spirit came upon them. For onlookers it was bazaar! There was a loud sound like wind. Tongues of fire rested on the people’s heads. People were speaking in foreign languages, men and women were both prophesying. Rich people, poor people, everybody was glorifying God in this way. It was so strange and unexpected that the onlookers thought that the people were drunk!

This was not normal! In the onlooker’s experience, God only spoke through prophets (and He hadn’t done that in longer than anyone could remember.) Servants did not speak for God. Women almost never spoke for God. And yet, this was happening right before their eyes.

Peter stood and quoted Joel. “And it shall come to pass in the last days, says God, that I will pour out My Spirit on all flesh; your sons and daughters shall prophesy, your young men shall see visions, your old men shall dream dreams. And on My menservants and on My maidservants, I will pour out my Spirit in those days (Acts 2:17-18).”

God was doing a new thing. Even though it lined up word for word with scripture, the people had a hard time recognizing the fulfillment of scripture for what it was because it was so……weird. We can understand that. We like predictable. We like for things to be the way we have always known them to be. But God is way too imaginative to boxed in by what we have seen and experienced in our own short time here on earth. Sometimes He does something new. We need to be okay with that.

This is happening right now in the Middle East. Many people in countries that are openly hostile to the gospel are coming to faith in Christ because of dreams that they are having of Jesus. Personally, I have never had a dream that changed my life. I don’t know anyone who has. It seems strange to me. But, just because it has never happened in my experience, doesn’t make it wrong. Let’s be open to God doing something new in our lives today.

(A word of caution; just because something “religious” is different doesn’t mean that God is doing a new thing. If the new thing doesn’t line up with scripture, then we need to run far from it.)