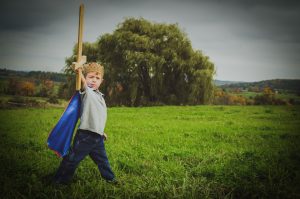 God has an astounding sense of humor.

When King Saul’s hatred and jealousy of David became so great that he developed a Captain Ahab-type obsession with killing him, God used King Saul’s own children to thwart multiple attempts by the king on David’s life. Saul’s oldest son Jonathan became his best friend, and Saul’s youngest daughter, Michal, fell desperately in love with him. How’s that for irony?

Michal loved David so strongly that her love for him is actually the only time in scripture when a woman’s love for a man is recorded. Seriously. The only time.

Instead of honoring Michal’s love, her father leveraged it in an attempt rid himself of his rival. He promised Michal to David, but only if he brought him proof that he had killed 100 enemy soldiers. King Saul assumed that David would die in the process and his problem would be solved.

The next thing we know, Michael has defied her father, in yet another of his attempts to kill David, and has heroically saved David’s life.

Several times Jonathan warned David about his father and helped him escape with his life.

When King Saul finally realized that his plan to use his children against his rival had backfired dramatically, “Saul threw his spear at Jonathan to kill him.” (1 Sam. 33) He also married Michal off to someone else. His hatred for David had literally overwhelmed his paternal love for his children.

This situation between Saul, David, Jonathan and Michal reminds us of some words spoken by Joseph when he saved his family from starvation after his brothers had sold him into slavery: “You intended to harm me, but God intended it for good.” (Gen. 50:20)

God could have used any means or any person to save David’s life in all of those situations. I think that it’s telling that He chose to use King Saul’s own children to do it, don’t you?