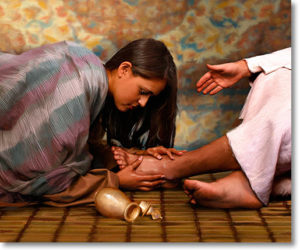 Each of the four gospels records a story of a woman anointing Jesus’ feet with oil. Without a careful study of the texts we would easily believe that they were all recording the same event but might be confused that many of the details of the story don’t match. However, many scholars and Bible teachers (myself included) believe that there were actually two times when a woman worshiped Jesus in this way and here’s why.

In Matthew, Mark and John, Jesus was attending a dinner in the town of Bethany. Matthew and Mark indicate that it was in the home of Simon the leper (whom Jesus had apparently healed some time before) and it is dated near the end of Jesus’ ministry.

The recounting of these stories are almost identical. Jesus was at Simon’s home eating, a woman anointed Jesus with nard (John adds that Lazarus, Mary and Martha were at the dinner, that Martha was serving and that Mary was the woman in the story). The disciples openly criticized Mary for her extravagance and complained that the fragrant nard should have been sold and given to the poor. Jesus rebutted their criticism by relating her actions to preparing Him for burial.

The account in Luke is quite different, indicating that Luke was relating another occasion where something similar happened. In Luke, Jesus was eating at the home of a Pharisee. An unnamed woman with an immoral history who was living in the town heard that Jesus was attending this dinner and came to the home of the Pharisee and anointed Jesus. (She was obviously not an invited guest as Lazarus, Mary and Martha clearly were in the other story.) In this narrative, it is not the disciples who vocalize their criticism of the woman, but the Pharisee whose unspoken complaints are noted. There is no discussion of the poor, or His death and burial by Jesus.

The common thread in these two stories is that these women pleased Jesus with their act of worship. In fact, Jesus told His critical disciples, “Let her alone. Why do you trouble her? She has done a good work for me (Mark 14:6).” Others didn’t understand, but Jesus knew their hearts.

Jesus knows your heart too! There may be times when we are misunderstood by people around us (maybe even other Christians). We can’t let criticism from others keep us from obeying God. If what we are doing is something that Jesus would call a “good work,” then it isn’t a “waste,” no matter what people say. Choose to hear the affirming voice of your Savior and let criticism roll off you like a pro.