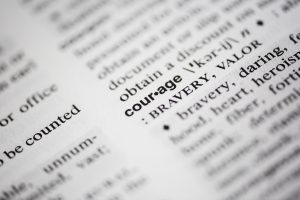 When my son was in second grade, his teacher had the most fascinating family story. They immigrated to the US from the Netherlands, but during the Second World War, her grandparents had harbored Jews in their very home. It was obviously a huge risk for their entire family, their house was even searched by Nazi soldiers while some of the Jews that they were hiding were in it with them!

When I heard the story, I immediately hoped that if I were in the same situation that I would have the courage to do what they had done. I’m sure you did too.

Sometimes great acts of courage are something that we won’t have time to think about- we will just have to act immediately. Take, for example, the story in Second Kings of Jehosheba. Her instant courage literally changed history.

After King Jehoram died, his mother, Athaliah, quickly moved to secure the throne for herself. Tragically, in order to do that, Athaliah did the unimaginable. “She proceeded to annihilate all the royal heirs.” (2 Kings 11:1) These heirs were most certainly her grandchildren, but could have also included her own sons.

While soldiers were busy killing for the new queen, Jehosheba grabbed one of the babies and his nurse and hid them in the temple. They remained in hiding for seven years before the child was eventually presented as the rightful king.

I want to have the courage of Jehosheba, don’t you? But courage isn’t developed overnight. Courageous people have practiced being courageous, whether they knew it or not. We can too! It takes courage to welcome a stranger who visits our church, or minister to people outside of our regular community, to not run from messy situations in order to bring peace or step out of our routine in order to serve someone else. But every time that we flex our courage muscle, it grows until one day we realize that we have the courage that we need to do anything God asks.