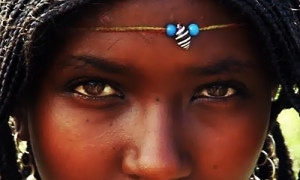 With Moses, Aaron, and Pharaoh so prominently situated in our reading this week, there is plenty of testosterone! However, the Bible records a rather bizarre (to say the least) story in Exodus 4 that reminds us that in a marriage, nothing affects one without also affecting the other.

Moses’ wife Zipporah did not sign-up to lead the revolution of a people that she wasn’t even a part of. She married a shepherd. Life may not have been exciting, but at least it was familiar (and relatively safe). To be fair, the story about God speaking to Moses through a burning bush, instructing him to go to the incredibly powerful Pharaoh and ask him to release several million slaves must have sounded a little far-fetched to her. What could possibly go wrong?!?

Yet, somehow she found herself and her two sons trudging through the wilderness following her husband to Egypt and a precarious future. Who knows what went through her mind, but I think we can safely assume after reading the chapter that she was not thrilled with Moses at the moment. Apparently, God wasn’t thrilled with him either.

Exodus 4:24 says, “And it came to pass on the way, at the encampment, that the Lord met him and sought to kill him.” This is a time in scripture where I want a few more details, you too? The Lord “met” him? Was this a theophany (a pre-New Testament appearance of Christ) or was it just circumstances such as an illness or catastrophe that the author realized was allowed by God? How did God seek to “kill” Moses? Did he have an accident or a heart attack? How does it even make sense that God would try to kill the very person that He had just entrusted the deliverance of His people to? The truth is, no one knows. Most of the commentators that I use for research didn’t even try to guess.

What we do know is that Zipporah saw the situation for what it was- Moses was being punished by God and was about to die- and she knew what to do to stop it. She immediately grabbed a sharp stone and circumcised her son. It saved Moses’ life, but she was not happy about doing it.

Zipporah threw the bloody piece of flesh at the foot of Moses, no doubt simultaneously trying to console her shocked and terrified child who was now in excruciating pain. (We don’t know how old Moses and Zipporah’s son was at the time, but remember that in Genesis 34, the men of a Canaanite city were in so much pain from being circumcised that Levi and Simeon were able to kill every last one of them.)

“Surely you are a husband of blood to me,” Zipporah said to Moses. This is roughly translated, “I just saved your life- you owe me big!”

We don’t hear much more about Zipporah from this time on. We do know that she was living with her father later on in the story and not with her husband. Many scholars believe that after this situation she turned around and took her sons back home. There is no way of knowing.

Just like Zipporah, there will be times when we find ourselves on a path not of our choosing. We may not like or understand the path. We may not trust the person dragging us down the path. We can be sure that Moses was following God in this situation, but that may not be the case in our circumstance. In those times, we need to pray fervently for two things.

First, we pray that God would lead the person that is leading us. No one can ultimately derail God’s plan for our life. We don’t necessarily have to trust the other person, but we can trust God.

Second, we can pray for our own wisdom. James 1:5 tells us, “If any of you lacks wisdom, let him ask of God who gives to all liberally and without reproach and it will be given to him.” On whatever path we find ourselves, we can ask God to open our eyes to His plan for us while we are on it.