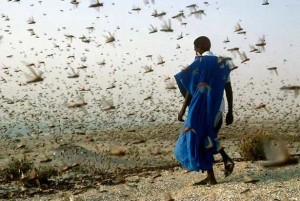 I included the story of the plagues in Egypt in our “women” of the Bible study because those plagues affected everyone, and they were nasty! Imagine going to make bread for supper and finding frogs in your mixing bowl; and don’t even get me started on the lice. Yuck! We have to laugh at a couple of these situations.

First, the response to the plagues by the royal magicians was hilarious, don’t you think? When Moses turned his staff into a snake, the magicians did too. When God turned the river water to blood, the helpful magicians then made what little clean water was left into blood also. They were also able to produce frogs when the country was overrun with them. Just what you need, more snakes, dirty water and amphibians! Honestly, if they wanted to be helpful, why wouldn’t they make all of this disappear?

Satan does have some power, and we should never think otherwise. However, Satan’s power is limited and he is always a duplicator, not an inventor. The magicians couldn’t do anything new, they could only copy what God had already done. Satan works the same way with us. John 10:10 says, “The thief comes to kill, steal and destroy.” He is not creative enough to deviate much from those three things. You don’t have to wonder if you are going through a spiritual battle in your life. If good things are being killed, stolen or destroyed, this is the work of the devil.

God also controls Satan’s power. He allowed the magicians to copy the first few miracles, but after that God said, “No more”. God’s point was not to torture the people with these plagues, but to show them His power. The magicians got the message. In Exodus 8:19 they told Pharaoh, “This is the finger of God.” But even so, Pharaoh would not let the people go.

The second thing worth noting is that during each plague, Pharaoh would call in Moses and Aaron and say, “make it go away and then I will let you go.” He never repented, he just wanted the suffering to stop. Don’t we sometimes do the same thing? Our own actions may have natural consequences that are painful for us, but rather than repenting and turning away from our sin, we just beg God to take away the hurt.

Third, God began to separate His people from the Egyptians. Everyone experienced the first three plagues, but at plague number four (the flies) God began protecting His people. The flies only swarmed where the Egyptians lived. God wasn’t just showing the Egyptians who He was, He was reminding His children who He was. He was all-powerful, but He was also their protector. After 400 years of relative silence, they needed that reminder. Have you ever had that happen? In your moment of greatest need, has God shown Himself to you in a special way? I hope we’ve noticed when He has.

By the eighth plague, everyone had gotten the message except for Pharaoh. Pharaoh’s servants begged him, “How long shall this man be a snare to us? Let the men go, that they may serve the Lord their God. Do you not yet know that Egypt is destroyed (ch. 10, v. 7).”

Please note that they asked Pharaoh just to let the men go. The implication was that the women and children would stay behind and ensure that the men came back. That was not God’s deal. He said, “Let my people go-” every, single one of them. Pharaoh tried bargaining as well. It didn’t work. God wants our total obedience, not just the parts that we like to give.

What an experience this must have been for the Hebrew women. It would have been at the same time terrifying and amazing. They were seeing God do astonishing things! The fact that this was the work of God was unmistakable. This was stretching their faith far enough that they would be able to step into the Red Sea with their children and trust God to get them safely to the other side. I hope its stretching our faith too.