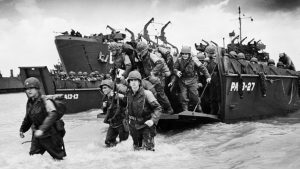 My son is fascinated by history- particularly military history. (I think it’s a boy thing.) Recently, I was reading a book about the invasion of Normandy during World War II with him. The lead-up story to that event is so clever that it is nearly unbelievable! Here’s what happened.

Hitler’s troops were sweeping across Europe in their quest for world domination. Allied commanders knew that the only way to stop them was to start taking back territory on the continent, but that was no small feat. The plan to invade Normandy, France was a tricky one.

The Allies set up two false base camps of operation to trick the Axis leaders into believing that there was a military force at these locations when there really wasn’t. They used blow-up tanks, cardboard cut-outs, and, with the help of Hollywood movie professionals, made these enormous (but fake) camps look entirely real to the enemy. They also hired spies to whisper just the right half-truths to just the right people to reinforce what they wanted the enemy to believe. Because of this, Hitler did not send large numbers of troops to the beaches of Normandy, but instead kept them in place to defend possible invasions from these pretend military sites where there was no actual threat. When the Allies hit Normandy, the true target, the Axis powers never saw it coming.

It was the beginning of the end of the War. Hitler was defeated, in large part, because his strategy wasn’t grounded in the truth.

In the book of Colossians, the apostle Paul warned the Christians there to watch out for people spreading false doctrine. These false doctrines were particularly dangerous because they sounded so plausible. Paul warned, “I am saying this so that no one will deceive you with arguments that sound reasonable (Col. 2:4).”

We aren’t generally duped by things that are obviously absurd. We are in more danger from things that sound so good that we really want them to be true. This has been the devil’s game plan since the Garden of Eden. “Did God really say…(Gen. 3:1),” he asked Eve. “That doesn’t sound like a loving God. Are you sure? Could you have interpreted God’s intention wrong?” were the implications of Satan’s question.

And before she knew it, Eve had believed the devil’s half-truths, eaten the forbidden fruit, and opened the door for sin to enter the world.

We are grappling with nearly identical arguments today. Just yesterday I read an entire series of tweets by a Christian leader asking some of the same questions about something that scripture is clear about. “I know what the Bible says,” she basically said. “But that doesn’t sound like my interpretation of Jesus. He would have taught this…instead.” And the truth is, I wanted what she was teaching to be true. It would be far less complicated if it were true. It would be easier. It sounded so good- almost.

The way to guard against the spiritual defeat that can come from believing false doctrines is to know the truth. The more that we are setting everything that we hear up to the truth of scripture, the less we will be in danger of believing things that aren’t true.

Previous StoryWhat Is There to Complain About? (Philippians 2) Next StoryWorking for God (Colossians 3)