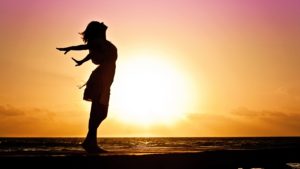 Having a parent forsake you is one of the most hurtful situations a child can experience. I was blessed with great parents, but my parents were also foster parents so our family experienced complicated family situations first-hand. I remember vividly spending a Christmas day with a foster child sitting under our kitchen table because his mother had called to let him know that she never wanted to see him again and he was devastated. Merry Christmas!

David knew something about family rejection. After he had been anointed king by Samuel, but was not actually the king, things got a thorny pretty quickly. King Saul had no intention of giving up his crown and was becoming murderously unstable. David was married to the king’s daughter and bff’s with his son, but that didn’t keep King Saul from chasing him around the country with every intention of killing him.

By verse three David had asked the king of Moab if his parents could stay there.

Jewish life completely revolved around their family and community. Their land was passed down from generation to generation. Jewish families would never have abandoned their family land if they had any choice at all. Moving to Moab (historically Israel’s enemy) must have been devastating for David’s mom and dad.

We don’t hear of David’s parents again. We might assume that they died in this foreign land where everything was unfamiliar and hard. We might also assume, based on Psalm 27, that they let David know that they blamed him for their situation. Whatever was said, he felt their disapproval acutely.

You may also have a complicated relationship with one or both of your parents. It’s hard. It may be something that you have tried to overcome your entire life. If that is the case, let David’s words bring you some comfort. “When my father and my mother forsake me, then the Lord will take care of me.” Then the Lord.

I don’t say this flippantly at all, but let the Lord take care of you. So often we experience deep, deep hurt and we never heal from it because we hold it tight, even find our identity in it, and never let it go enough to let Jesus bind up our wounds. You have to choose to let Him heal you.

Letting go of our hurt won’t be easy. It will require prayer and Godly council from spiritually strong people who understand what we have experienced. If we have the courage to give our hurt to God, as David did, we will find that He takes better care of us than we can imagine.