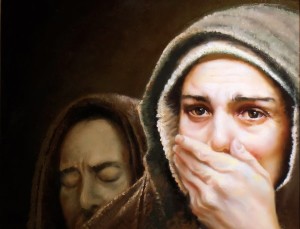 Numbers chapter twelve opens like this: “Then Miriam and Aaron spoke against Moses because of the Ethiopian woman whom he had married…So they said, ‘Has the Lord indeed spoken only through Moses? Has He not spoken through us also?’ And the Lord heard it.” There is so much in these few sentences!

First, there is some confusion about who this “Ethiopian woman” was. Zipporah was Middionite, which could have been described as Ethiopian in a very broad sense. What seems more likely is that Zipporah died and Moses had married again. This recent marriage may have been just the excuse that Miriam and Aaron needed to speak out against their brother.

The Hebrew rendering of this account makes it clear that Miriam was the instigator of this public criticism, which seems more like a power grab then anything of real substance. Every other mention of Miriam in scripture is positive. She was resourceful and intelligent. She led the women of Israel in singing praises to God after they crossed the Red Sea, and the Bible notes her as a prophetess. She was the first woman in scripture to be given this title, but women like Deborah, Huldah, Isaiah’s wife, Anna and Philip’s four daughters would follow. She must have played an important role in the Exodus story because Micah 6:4 notes that God delivered Israel through the hands of Moses, Aaron and Miriam. God had obviously spoken through Miriam.

The problem was that Miriam and Aaron decided that God using them in their own leadership capacity was not enough, they wanted the power that Moses had. They spoke out against Moses publically and the Lord heard it.

God values unity in the body of Believers. He also values wise humility. Philippians 2:3 says, “Do nothing from rivalry or conceit, but in humility count others more significant than yourselves.” If only Miriam and Aaron would have remembered this!

A basic google search of any well-known Bible teacher will garner first their website and places where you can buy their books and then immediately you will find pages and pages of people with personal blogs who are trashing these Bible teachers. Most of the criticism is not even about important theology. If it is a woman teacher the criticism is often about her hair, her clothes or her voice. I read a blog that ended a long list of petty complaints about a particular teacher with the words, “and people wouldn’t even listen to her if she wasn’t cute!”

We need to be very careful about our criticism of fellow Christians, especially those with spiritual authority. James 3:1 says, “Not many of you should become teachers, my fellow believers, because you know that we who teach will be judged more strictly.” God will already judge them more strictly. Of course, we should judge their behavior and words against the Word of God, that is wise. We must pray for spiritual discernment! However, we must make sure that our motives are right, that our theology is correct and that we bring up our complaints in the appropriate forum and manner. If we do not, they will do immeasurable harm in our spiritual community and in our community at large.

Miriam and Aaron’s complaints against Moses did not please God and He was listening. He took this whole thing so seriously that He personally came down to defend His child. He rounded up the sibling trio and struck the ring-leader with leprosy. (We don’t know why Aaron was not also afflicted, but Miriam was not punished because she was a women- lest there be any confusion. According to The New American Commentary; “This is not the biased statement of a male dominated society, reflected in what some might call a man-God wrath against women.” She was punished because she was starting a rebellion against God’s chosen leader.)

In the end, Aaron repented, Moses prayed and God healed Miriam, but the lesson for us is that we must head Paul’s plea found in Ephesians 4:1. “I therefore, a prisoner for the Lord, urge you to walk in a manner worthy of the calling to which you have been called, with all humility and gentleness, with patience, bearing with one another in love, eager to maintain the unity of the Spirit in the bond of peace.”