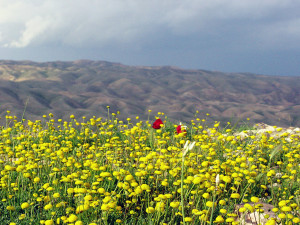 Mahcah, Noah, Hoglah, Milcah, and Tirzah had a problem. Their father died, and because he left no male heir, their inheritance and his name were about to be lost forever. “We might expect that women, heirs to Egyptian slavery and put under a law that favors men, might react by keeping silent (The Torah: A Woman’s Commentary).” These sisters were not the keeping silent type.
They did the unimaginable. They went straight to the top- Moses himself- and asked that what had never been done before be done. These sisters wanted to inherit their father’s land. It was absurd! According to the Forerunner Commentary, “Such an appeal was virtually unheard of because at that time a woman’s station in society was slightly higher than a child’s. The child was always on the lowest level, which is one reason why Jesus said we have to become like a child. All of society revolved around men.” Moses did three things.

First, he agreed to listen to the women. Certainly he didn’t have to. Some of the significant men standing at the door of the tabernacle may have even snickered at the thought that he would bother hearing their story, but Moses knew something about leadership. Leaders listen. This goes for the leader of a nation and for the mom up to her elbows with kids (me included!).

Second, Moses admitted that he didn’t know the answer. He could have sighted tradition and told the girls to get married and let things take their normal course. This was their place and their duty. Why were they rocking the boat? What did women need property for anyway? He could have even pointed to the law. There was no provision for women owning property. Instead, he decided to actually find the right answer for these women.

Third, Moses took the matter to God. So often, we assign opinions to God because we believe that we know what God should think about certain situations. We forget to actually ask Him! Moses asked and God gave him an answer. “The daughters of Zelophehad speak what is right; you shall surely give them a possession of inheritance among their father’s brothers, and cause the inheritance of their father to pass to them (Num. 27:7).”

God gave these women more than they asked or dreamed! They asked for “possession” of their father’s land. That would have given them the right to use the land as long as they lived, but when they died, it could be lost to another family for lack of a male heir. God gave them “possession of inheritance”. That meant that God gave them the power to pass the land on just as if they were sons- to their own children. They had complete ownership in every sense of the word.

Sometimes we really “have not because we ask not (James 4:2).” We accept the status quo because we aren’t brave enough to imagine (or ask) that things could ever be different. These five sisters were visionaries and God was on their side. Their courage changed history. What dream has God put in your heart?