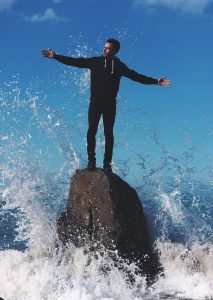 King Herod realized that persecuting the new Christian church was politically expedient. He had the apostle James killed and watched his poll numbers among the Jewish elite in his constituency skyrocket. It worked out so well for him that he put Peter in prison and planned to put him on trial as well.

The night before Peter’s trial, as he was being guarded by four squads of soldiers and was sitting in a cold, dark prison cell bound in chains, Peter was sleeping. He wasn’t just dozing, he was in a deep sleep. Peter was sleeping so soundly, in fact, that when an angel came to rescue him, the angel had to strike him on the side in order to wake him up!
How does that happen? How does someone who is facing nearly certain death, and excruciatingly difficult circumstance, have so much peace?

Let’s not pretend that Peter was so heavenly minded that death meant nothing to him. Peter had a wife (Matt. 8:15), and a family. He may have had children, he had people who were dear to him and whom he loved. Peter was a real person. Yet, he still was able to find peace in his difficult (to say the least) circumstances.

Peter found peace and we can too. The secret is “thriving despite.” It’s knowing that God is fully able to change your circumstances but understanding fully that He might not and trusting Him completely, no matter what.

This is what Shadrach, Meshach and Abednego meant when they were facing a blazing furnace and a king who was willing to throw them into it if they refused to bow down and worship the image that he had created. With the fire so hot that they could feel and hear it, they confidently declared to the king: “O Nebuchadnezzar, we do not need to defend ourselves before you.  If we are thrown into the blazing furnace, the God whom we serve is able to save us. He will rescue us from your power, Your Majesty.  But even if he doesn’t, we want to make it clear to you, Your Majesty, that we will never serve your gods or worship the gold statue you have set up.”

Like Peter, these men fully accepted what they were facing. They didn’t lose faith that God could rescue them, but even if He did not, they would trust Him. We can learn to do that too.