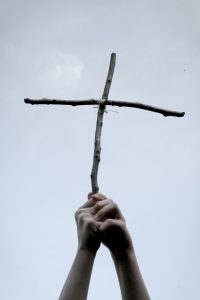 In Acts 14, Paul and Barnabas experienced a dramatic turn of events. They had healed a man who had been crippled from birth. As the man was listening to Paul preach, Paul looked right at him and called at him to stand to his feet. The lame man did!

The crowd in Lystra went wild! They couldn’t believe what they had seen. “The gods have come down to us in human form,” they shouted! They even began calling Barnabas, “Zeus” and Paul, “Hermes.”

The people in Lystra were so sure that Paul and Barnabas were gods, that the priests of Zeus came parading toward them from their temple with bulls and wreaths ready to make sacrifices to them.

We might think that the people’s reaction was a little over the top, but there was a backstory. In Lystra there was a legend that once before Zeus and Hermes had come to their city in human form, but no one would show them any hospitality except one older couple. Supposedly, Zeus and Hermes were so outraged that they destroyed everyone in the city except the couple who had helped them. These Lystrans were not taking any chances this time!

Paul and Barnabas made it clear that they were not gods and the people became so outraged that they stoned them and left them for dead. They literally went from being willing to sacrifice bulls in Paul and Barnabas’s honor to killing them in the very same day. Isn’t that bizarre?

This is why we can’t be too tied up in the masses loving us. People are fickle and can turn on us as quickly as they did Paul and Barnabas. We have to be the same people of God whether people love or hate us, just like Paul and Barnabas were. They were preaching the good news before the people mistook them for gods and after they had been stoned and left for dead, they picked themselves up and walked back into the city and began preaching the good news again.