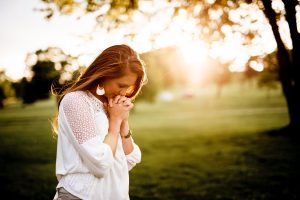 Have you ever felt like you were working yourself to death, but never actually getting ahead? As if, no matter what you did, you had nothing to show for your effort?

When a remnant of Israelites moved back to the Holy city of Jerusalem after their captivity, they found themselves in this very predicament.

Through the prophet Haggai, God had a little chat with His people. “Think carefully about your ways: You have planted much but harvested little. You eat but are never satisfied…The wage earner puts his wages into a bag with holes in it.” (Haggai 1:6)

God went on to remind the people that the reason that they were experiencing so little fruit from their tremendous amount of effort was that they hadn’t done what they should have done in the first place. They had rebuilt homes for themselves and then gone on their merry ways while His home, the temple, lay in ruin.

It was an act of faith for the people to stop their everyday, survival oriented lives and work on the temple like God had told them. They barely had enough to eat. What if this harvest was as poor as the last? They had no physical reason to believe that it wouldn’t be. What if the work on the temple, took away from what they had to do to survive?

The people decided to trust God.

Once they began rebuilding the temple in earnest, they began experiencing God’s favor on all parts of their lives and economy. God said, “From this day on I will bless you.” (Haggai 2:19) In fact, just to make sure that they noticed the difference, God told them to mark down the very day that the temple’s foundation was laid. From that moment on, things dramatically changed for the better.

It’s the same with us. Sometimes, God will refuse to bless us in new ways if we aren’t being obedient with the very things that He has already entrusted us with. It’s as if He is saying to us, “Think carefully about your ways…”