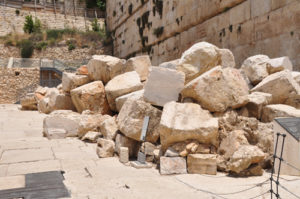 After a visit to the temple in Jerusalem, Jesus’ disciples couldn’t get over its grandeur. As they remarked upon it to Him, Jesus made a seemingly improbable prediction. “’Do you see these things?’ he asked. ‘I tell you the truth, not one stone here will be left on another; every one will be thrown down (Matt. 24:2).’”

The disciples could hardly believe it! This temple may not have had the spender of Solomon’s, but it was still a magnificent (and massive) structure. Estimates are that the entire temple compound took up a third of the city of Jerusalem. To think that it would not only be destroyed, but that every one of the countless stone blocks that created the temple would be taken apart and thrown down was unimaginable!

In AD 66, the Jews revolted (again) against the Romans. Titus was sent to squelch the rebellion and he sieged the city. Tragically, this siege began only days before the celebration of Passover and countless Jewish worshipers were trapped inside the city along with its citizens.

The historian Josephus recorded that the Romans used battering rams against the walls of the city during the day and the Jews would spend all night rebuilding them. As the siege went on, food ran out and people began dying from starvation and disease.

When the Romans finally broke in, many of the remaining people fled to the temple for safety. According to Josephus, Titus instructed his men to preserve the temple- which was full of gold. However, once they finally broke through, their emotions (and according to rumor- alcohol) took over. One of the soldiers threw a burning torch through a window and the entire temple lit on fire. As it burned, all of the gold melted into the cracks of its stone walls.

When the fire eventually went out, the soldiers literally had to take the temple apart stone by stone in order to retrieve the gold.

When God tells us that His word will not fail (Luke 1:37), He means it. We can take all of it to the spiritual bank.