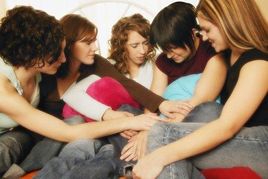 If Acts chapter 16 has anything to teach us it is this: Never underestimate the power of a group of praying women.

When Paul and his group of fellow missionaries arrived in Philippi they found that there wasn’t even a synagogue in the city. The closest thing that they could find was a group of women who gathered in the open air near the river to pray together. (Is there anything more beautiful than that?)

The group of missionaries joined the women and Paul began to teach them. One in particular, a successful businesswoman named Lydia, opened her home to them and assisted them in their ministry. This little band of women, who started out just gathering together to pray became- of all of the churches that Paul ministered at- the most noted for their generosity.

This little group of praying women morphed into a thriving church, so significant in fact, that Paul later wrote a letter to them. (The book of Philippians.) He began his letter to them by saying, “I always pray with joy because of your partnership in the gospel from the first day until now (Phil. 1:3-4).”

The Philippian church not only impacted their own community, but continued to support Paul financially in his missionary endeavors. Paul noted in his letter to that church, “Moreover, as you Philippians know, in the early days of your acquaintance with the gospel, when I set out from Macedonia, not one church shared with me in the matter of giving and receiving except you only, for even when I was in Thessalonica, you sent me aid again and again when I was in need (Phil. 4:15-16).”

This little group of women who met beside the river to pray is literally still changing the world. If that’s not inspiration, I don’t know what is. Let’s be women who pray.