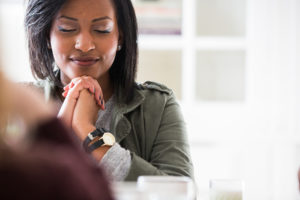 When you were learning to pray, did people tell you; “Just talk to God like a friend.”

In as much as He is a “friend who sticks closer than a brother” (Proverbs 18:24), that is true. However, He is so much bigger than that! When I have problems, I can tell my friends all about them, but the most that they can offer me is usually empathy. Jesus can actually do something about them!

In Luke 7, Jesus saw a funeral procession headed by the mother of the deceased. As if losing her only child wasn’t bad enough, this poor woman was also a widow. Without a husband, her son was her only security in her old age. His death was not only a tragedy, for her it was also a catastrophe.

In ancient Middle Eastern culture, when someone died, the person had to be carried out of the city. As the body was carried through town, friends, family, and often the entire community, would join the funeral procession from behind. They would join in the mourning and sympathies with the people who suffered because of the death. This was the most that this widow’s friends could offer her. Jesus offered much more.

When Jesus saw this particular funeral procession, He didn’t join in from behind, as was the custom. He approached from the front and addressed the mother directly. He was going to do more than sympathize. He was going to fix this.

“Don’t cry,” He told the mother. Then He touched the dead body of the boy and immediately the boy sat up and began to talk.
When we are praying, we can be sure that we are communicating with someone who is fully able to do “more than we can ask or imagine (Eph. 3:20).” We can (and should) approach Him full of faith that He is more than our friend, He is God.