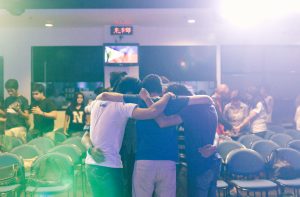 Poor Eutychus really wanted to hear what the apostle Paul had to say. Even though the room was full, he sat in a windowsill of the third story window and listened intently. But “Paul talked on and on (Acts 20:9)”…and the room was so warm and it was after midnight (vs. 7).

Before Eutychus knew what had happened, he was laying on the ground below. When he opened his eyes, people were surrounding him with concerned looks and Paul was laying on top of him! He had died and come back to life! (Hilariously, the name “Eutychus” means “fortunate.” I’ll say!)

As if this story couldn’t get better, everyone went back upstairs and Paul kept right on preaching until the sun came up! When Paul finally finished talking, “the people took the young man home alive and were greatly comforted (vs. 12).” After coming so close to losing this dear teenager, what a relief it was to have him restored to them!

I believe that there are a few things that we can learn from this story that may help us restore some of the lost youths in our own churches. Did you know that statistically, 70% of students who attend a church youth group leave the church within two years of graduation? The number is 88% if you include the students who are from Christian homes but didn’t attend youth group. This statistic should stagger us. It’s as if these students are falling out of our churches and if we don’t do something, they may end up on the ground below spiritually dead. May it not be so!

First, Eutychus would have been much safer had he not been on the margins of the church gathering sitting in the window. Had he been actively engaged in service, he would have been less likely to fall out of a window. In our churches, we must not seek to just entertain our youth in youth services, we need to give them a place to serve so that they feel the value and responsibility of being a part of a church community.

Second, when we notice a youth is in danger of being lost, we must do what Paul did- stop what we are doing and rush to the child. The word that describes how Paul threw his arms around Eutychus is “epipesen.” It implies a loss of dignity or station because of the urgent way that the person is hurrying. It’s the same word used to describe the prodigal son’s father rushing to him when he finally came home. If a teenager has fallen away from our church it is an emergency! We must stop what we are doing and rush to them with outstretched arms.

Finally, we must pray for our youth. Luke does not record specifically that Paul prayed for Eutychus, but we can safely assume that because of the similar (and by similar, I mean exactly the same) way that Paul fell on him the way that Elijah and Elisha did when they were in similar (and again, I mean exactly) same situations and they prayed: Paul must have prayed. We don’t need more activities for our already busy youth. We need more prayer over them.
In the end, Eutychus’s church welcomed him back gratefully. If we follow Paul’s example, we will find that we will welcome back far more of our teenagers than we are today.