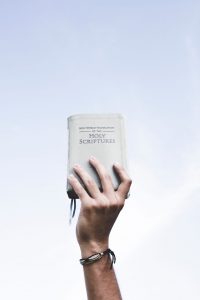 When you were in high school, did you ever do pranks on a rival school? Once, just before football season, some kids went mud running through our football field and tore the turf to shreds. It was so bad that we had to play all of our games “away” that year while we waited for the new grass to grow in. (We still made the playoffs.) Something like this happened in the Bible.

The Philistines were drunk with victory when they entered the abandoned Israelite camp. They couldn’t believe it when they noticed that the Israelites had fled in such a hurry that they left behind the most important symbol of their God- the Ark of the Covenant. The jubilant soldiers yarded the Ark back home and set it up in the temple of Dagon, their god.

What a way to prove their superiority and the superiority of their god! Obviously, since the Philistines had been victorious in battle over the Israelites, it stood to reason that their god must be more powerful. They secured the door of Dagon’s temple and went home for the night.

The Philistines were right about one thing; God had allowed them to be victorious over His people. The Israelite rebellion against God had risen to the point where even their priests were lying, stealing, threatening bodily harm to those who dared to point out their sin, and much worse! God’s mercy had come to an end in this situation and He allowed them to be defeated by their enemies.

However, God was not about to let Himself be reduced to a good luck charm or a status symbol. What He had declared as holy, was holy. The Philistines soon learned that degrading something that God had declared holy would not work out well for them.

In a similar way, when we submit our lives to Christ, God declares us to be holy. (1 Peter 2:9) That holiness should change the entire trajectory of our lives. Our motives, our thoughts, our speech, the way that we present ourselves, our conduct toward others, our behavior, everything should be different because God has declared us holy.

Neither the Israelites, nor the Philistines, took God’s holiness seriously in this situation, and it did not turn out well for them. Let’s you and I make a different choice. Let’s choose to live holy lives that honor The One who made us holy.