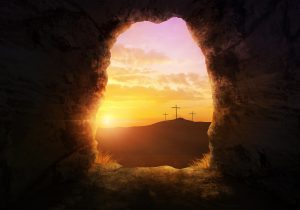 I wonder if they wondered, even for a second, if he really was going to be raised from the dead like he said he would.

Strange things happened when Jesus died. The sky had become dark like it was the middle of the night. There was an earthquake and the thick curtain in the temple was torn in two. Obviously, something powerful was happening. Did any of them wonder what? Did anyone dare to hope that he would keep his word?

We aren’t told that any of Jesus’ followers felt any feelings of expectation or hope while he was dead. They certainly didn’t act like they did. But, don’t we often make that same mistake? Don’t we habitually pray prayers out of routine, go to church because it’s Sunday, and rush frantically through our days forgetting that we have the best news in the world- the gospel?

Let’s stop living like this! Let’s you and I decide right now, this Easter, to live like we believe that Jesus paid the price for sin, conquered death, split history in two, and is coming back for his children any moment. Let’s you and I live with the hope and expectation that everything that he says he will do, he will do. Let’s you and I determine to tell others about the hope that we have because of all of this.