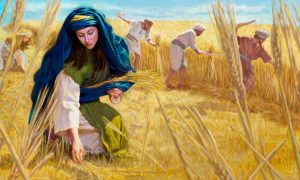 Every representation that I’ve ever seen of the Biblical character of Ruth shows a woman with glowing, olive-colored skin, long, dark eyelashes and hair so shiny that it belonged in a shampoo commercial. Her robe was neatly ironed. She is lovely. It’s easy to see why Boaz would take one glance at her and fall desperately in love.

Except, that’s not exactly how the story went.

When Ruth was a young girl, her father had one main responsibility toward her: to arrange the most advantageous marriage possible. Many factors went into these arrangements, but basically, the better connected her family was, the more money they had and the more physically attractive the girl was would determine how good of a marriage a father (or another close, male relative) could negotiate.

Consider this: Ruth married a sickly, poor, foreign refuge from a country that her people were constant enemies with. Her father had scraped the bottom of the social barrel to find her a husband. Apparently, it was the best that he could do.

Ruth may not have been the kind of girl that turned every head, but it didn’t matter. She had a durable faith in God and a strong character. When she and her mother-in-law finally arrived in Israel, Ruth didn’t just sit around waiting for things to happen. She made a plan and got to work.

In Ruth 2:3 the Bible says, “So she went out, entered a field and began to glean behind the harvesters. As it turned out, she was working in a field belonging to Boaz, who was from the clan of Elimelek.”

“As it turned out…” Don’t you love that? Ruth had taken a great risk when she chose to follow God, and God took notice of her faith. He sent her at just the right moment to just the right place to be noticed by just the right person who would do just the thing she needed.

Ruth’s faith and character were remarkable and it proved to be more than Boaz could resist.

The first time Boaz lay eyes on Ruth, he said; “Everything that you have done for your mother-in-law since your husband died has been fully reported to me: how you left your father and mother and your native land, and how you came to a people you didn’t previously know.” (Ruth 2:11)

Boaz was so impressed with Ruth’s character that he gave her this lovely blessing. “May you receive a full reward from the Lord God of Israel, under whose wings you have come for refuge.” (Ruth 2:12) Boaz may not have realized it then, but God was using him to answer his own prayer for Ruth.

There’s an old saying: “Character is what you do when nobody is looking.” When nobody else was looking, God saw the kind of girl that was so impressive that He put her in His Son’s family. What a beautiful inspiration Ruth turned out to be!