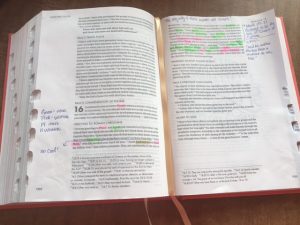 I’ve never written or taught on the greeting portion of one of the New Testament epistles before- but the last section of Paul’s letter to the Romans is just too good to pass over. I think you are going to love this!

First, in the long list of names of church leaders that Paul gave a personal greeting to, 11 of them are women and 19 are men. For all of the controversy that surrounds the apostle Paul and his views on women, the first two people to be mentioned are women. The first, Phoebe, gets her own paragraph, not just a mention. In fact, it is believed that she was actually the person who personally delivered this letter to the Roman church while she traveled there on business. (This is why we should always view the Bible as a whole and never cherry-pick one verse and build a theology on it.)

Second, did you know that the majority of the names mentioned are the names of slaves? I think that’s fascinating. Phoebe was a successful business woman, there were people wealthy enough to support house churches in their homes mentioned, and then slaves all mixed together working hard for the Lord as one. I think that’s beautiful, don’t you?

Of Persis, Paul says, she “has been a mother to me (vs. 13).” Here is a woman who had apparently nurtured, taught and cared for him so consistently that it was as if she was his own mother. What an example to us. Being a mother is hard work! Persis did the hard work with Paul and it turned out to be extremely important to him. We never know what spiritual fruit will come from our intentional investment into those kids down the street, the noisy 5th graders in our Sunday School class, that group of high schoolers who eat everything in your refrigerator when they have small group at your house or that young mom who is so tired that she can hardly hold a conversation. Let’s be like Persis and invest in the generation behind us, no matter what age we are.

Persis was also the mother of Rufus. Scholars believe (though we can’t know for certain) that this Rufus was the same Rufus mentioned in Mark 15:21 as the son of Simon of Cyrene. Simon was the man who carried Jesus’ cross for him when he was too weak from the beating that He received to carry it any further on His own. Can you imagine? If that is the case, in Mark it says that Simon was just “passing by” at the same time that Jesus was being crucified. That experience must have changed the trajectory of that family’s life forever.

There is also a mention of Epaenetus, “who is the first convert to Christ from Asia (vs. 5).” From the very beginning, the gospel was spreading out over the whole known world, just as God meant it to.

What a blessing and inspiration this list of ministers is to us. I’m glad we stopped and studied it together, aren’t you?
We are so glad to have you in Bible study with us! If you miss a devotion, you can find them archived at https://comethirstyministry.com/blog/