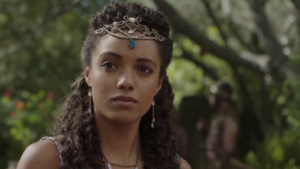 Michal. Princess daughter of Israel’s first king and first wife of its second. She has been vilified by most who have attempted to write or teach about her and is even listed in a book called, Bad Girls of the Bible. However, I believe that a careful study of her will reveal a sympathetic, and at times heroic, figure with a lesson to teach us. Let’s check her out!

God has an astounding sense of humor. When King Saul’s hatred and jealousy of David became so great that he developed a Captain Ahab-type obsession with killing him, God used King Saul’s own children to thwart multiple attempts by the king on David’s life. Saul’s oldest son Jonathan became his best friend, and Saul’s youngest daughter, Michal, fell desperately in love with him. How’s that for irony?

Michal loved David so strongly that her love for him is actually the only time in scripture when a woman’s love of a man is recorded. Seriously. The only time. Instead of honoring that love, her father leveraged it in an attempt rid himself of his rival. He promised Michal to David, but only if he brought him proof that he had killed 100 enemy soldiers. King Saul assumed that David would die in the process and his problem would be solved.

Michal was a resourceful and loyal wife, cleverly saving her husband’s life from yet another murder attempt by her father. When soldiers came to seize David, she lowered him out of the window of their house and he disappeared into the night. David was on the run, but he didn’t care to take his young bride with him. Some have tried to justify this action by asserting that a wife would have been an encumbrance to David as he moved from place to place hiding from King Saul, but since he took other wives during this time, that obviously was not the case.

Eventually, King Saul considered Michal abandoned by David and gave her to another man to marry. This was no-doubt another politically advantageous marriage for himself, but we will learn later that at least this husband valued Michal.

David acquired more and more wives and concubines throughout his life. The Bible names eight, but there certainly could have been others. Selfishly, when he finally became king, he demanded that Michal leave her current husband and return to his haram.
The last thing that we read about Michal is the argument that she and David had after he danced through the city, wearing nothing but an ephod, before the Ark of the Covenant. This is where Michal receives her sullied reputation, but before we get on our moral high-horse and condemn her for not being ecstatic about her husband’s worship, let’s put ourselves in her royal slippers.

Imagine hearing a loud commotion from outside of your haram walls. Being unable to go down to the street to find out what was going on, the best you can do is look out your window. What you see makes your heart stop. There is your husband, the king, dancing half-naked in front of every young woman in the city. How would you feel?

Michal didn’t understand why David danced before the Lord, and David didn’t understand Michal’s objection to it. Neither of them were willing to hear the other person out and it was the virtual end of their marriage. We can do better.

Arguments like these can destroy marriages, friendships and split churches. People often see things differently, sometimes we are right in the heart of the situation (as David was) and sometimes we can only see the big picture from a disadvantaged viewpoint (as Michal did). Paul addressed this kind of lack of understanding within the church in Romans 14 and 15. After laying out arguments on both sides concerning which day of the week to worship on and whether or not Christians should be vegetarians, Paul says, “Therefore let us pursue the things which make for peace and the things by which one may edify another. Do not destroy the work of God for the sake of food (Romans 14:19-20a).” A little understanding goes a long way and it may keep us from destroying something precious.