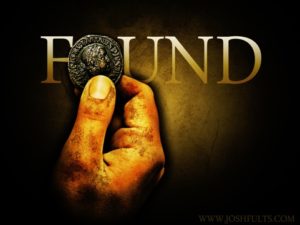 Since Jesus was telling these stories to an Eastern audience, we will try to get a little Middle Eastern perspective ourselves.

First, let’s consider the coin that the woman lost. If you are like me, you have always been taught that Middle Eastern peasant women kept their dowry on a necklace around their necks and that the woman in our story had lost a coin from her emergency stash. This still happens in this culture. It is called “the woman’s bank” and the equivalent of millions of dollars are tied up in this kind of capital (Bailey, 2005).

However, according to experts, it is much more likely that this woman’s coin was not from her emergency stash, but from the household budget that her husband provided her, which she kept tied in a piece of cloth. These ten coins were meant to sustain her family for a week or two, each one representing a day’s wage. Imagine how precious they were to her!

Jesus, of course, meant for the lost coin to represent lost souls. They are precious. They can be found! When they are found it is something to celebrate. However, Jesus also defined “redemption” in this story, and it would have turned the thinking of His Jewish listeners’ upside down.

Jesus told these stories because the Pharisees were grumbling that He had the gall to “eat with sinners.” The Pharisees were very righteous. They knew their scriptures, they followed the law of Moses and they even made up pages and pages of other rules to follow, just to make sure that they didn’t accidentally miss one of the original rules. Certainly, they thought, they had worked hard enough that they were deserving of being “found” by God.

Here Jesus told His listeners that lost people are like a woman’s lost coin. We have no power to save ourselves. There we lie, stuck in a crack on the dark basalt floor, where we will remain unless someone does the work of finding us.

Jesus is like the woman. He did the work of finding us. He died on a cross taking the death penalty for our sins. There is nothing that we can do to add to His work. It is finished. All that we can do is to accept being found by our Savior. That, my friend, is the Gospel! It is the difference between religion and salvation. The cross is the line between being lost and being found. There is no other way.

Have you allowed Christ to find you? Are you counting on your good works to get you into Heaven? Are you afraid that all of the bad things in your past means that you will remain lost forever? Neither of those are true. The only way to redemption is to accept being found.