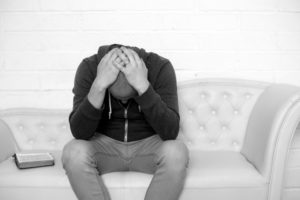 As we begin studying the book of Mark, I want you to find Mark 1 in your Bible. Hold your place there. Now find Mark 16. Don’t worry, I’ll wait.

Hold this book in your hand and feel the weight of it.

What you are holding is the work of a comeback kid, who messed up BIG TIME. Here’s the story.

The first time we find Mark (or John Mark) in scripture is in Acts 12 when his mother was hosting a prayer meeting for Peter, who was facing execution in prison. A few verses later we find Mark on the road with Paul and Barnabus. So far, it looks like Mark was being groomed by the premier apostles to do great things for God.

Something happened in Pamphylia that caused John Mark to throw in the ministry towel. We have no idea what it was, but it was too much for him to handle and he quit. There were so many strong emotions attached to this situation that later when Barnabas suggested that they give him a second chance, Paul would have none of it. They argued so heatedly that it ruined their friendship and their ministry together. They parted company and are never mentioned together again in scripture. Imagine being the young person who was responsible for that! John Mark had failed so miserably that even the apostle Paul was done with him.

Not only did Mark have to live with his own failure, he had to live with the situation that he caused with Paul and Barnabas! It’s a heavy load for anyone to carry and we might have expected Mark to quietly retire from ministry altogether. That’s not what happened, thank God!

We don’t know how, but somehow Mark allowed God to pick him back up, brush him off and send him back into ministry a little wiser. Not only did he write the gospel that you are holding, but Peter later called him his, “son” (1 Peter 5:13). Even the apostle Paul, at the very end of his life and ministry, instructed Timothy, who was coming to see him in his final days, “Get Mark and bring him with you, because he has been helpful to me in ministry (2 Timothy 4:11).”

The restoration went full-circle because of two things. Mark was humble enough to let God work in him and Paul was humble and wise enough to let go of his personal feelings and give him another chance. What an encouragement this can be for us! God’s always willing to help us make a spiritual comeback.

Previous StoryTogether at the Cross (Matthew 27) Next StoryTeacher, Don’t You Care? (Mark 4)