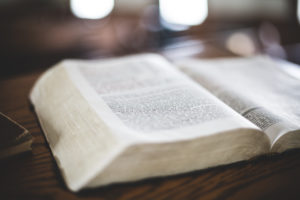 After reading the first chapter of First Corinthians, I had to wonder, had someone been reading my social media feed? This chapter is all about Christians and controversy and people taking sides behind certain leaders. Sound familiar?

Over the last several weeks, a certain leader in the Christian community came out publicly with a very controversial (to say the least) stance on a very hot-button issue. It was absolutely sure to bring disagreement, she knew it would, and it immediately did. One of the most disturbing things about the whole thing was what ensued on social media among her many followers.

Many were dismayed at this leader’s stance on the issue and said so. The backlash was intense, and often- hateful. To not agree with this woman, regardless of reasons or scripture or facts, was unthinkable to many. To many of her followers, she had said it, it sounded nice and so must be truth. Some of her followers posted nasty comments telling anyone who didn’t agree to “get out” of their group. Some used a hashtag: #istandwith___. At least one said not to let the door hit you on the way out. (Are we in third grade?)

Here is the thing. Being a leader in the Christian community is a serious thing. James warns, “Not many of you should become teachers, my fellow believers, because you know that we who teach will be judged more strictly (James 3:1).” That means that leaders must, must, must be extra diligent that what they believe, how they live, what they teach and how they say what they say is done in the wisest and most Biblically sound way possible.

Second, we should be very alert that we don’t follow any leader so closely that we would blindly follow them off the path of truth. The Berean Jews were commended for just that. “Now the Bereans were of more noble character that the Thessalonians, for they received the message with great eagerness and examined the Scriptures every day to see if what Paul said was true (Acts 17:11).”

The Bereans eagerly listened to Paul, but they diligently held his words up to the light of scripture to see if they lined up. This is Paul the apostle we are talking about. He wrote about a quarter of the New Testament. Even he was not above healthy scrutiny.

We must be like the Bereans. Of course, we should learn from others. I’m glad you’re reading my teaching right now! But never do we take in what a person says about God without checking for ourselves that it stands up to the light of scripture.