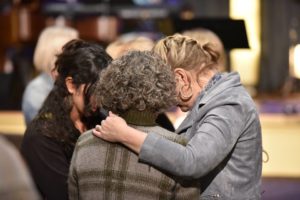 Not long after Jesus told the parable of The Woman and the Judge (Luke 18), which emphasized the importance of persisting in prayer, we read of someone actually putting that persistence into action. In the very next chapter, Luke records the story of a blind man named Bartimaeus who was sitting along the road begging.

When Bartimaeus was told that Jesus was passing by, he knew that this might be the only chance he would ever have to change his life. He began to call out to Him. “Jesus, Son of David, have mercy on me!” His loud calling was causing a scene and people began shushing him. (Don’t you hate to be shushed?)

It took Bartimaeus a split-second to make a life-altering choice. As the doubts, fear and reason began circulating in his brain, Bartimaeus shouted over it all. “Jesus, Son of David, have mercy on me!” And Jesus did.

Jesus told us to persist in prayer because persistence matters. We don’t want to miss out on something great because we become too discouraged, afraid, or- God forbid- bored to keep calling out to the Savior.