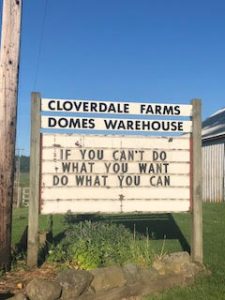 The farm down the road from us posts inspirational messages on their farm sign each week. This week it read: “If you can’t do what you want, do what you can.”

This is a perfect description of David’s attitude when it came to building the first temple. He desperately wanted to build a temple to honor the Lord, but God emphatically told him that he had the right heart, but he was not the man for the job.

Instead, he obeyed God and refrained from building the temple, but set up his son, who would eventually inherit the building project, for success by hiring stonecutters to prepare the stones that would be necessary. He also purchased “more cedar logs than could be counted” (1 Chron. 22:4). He also gathered iron for nails and bronze for the fittings that would be necessary.

The Bible says, “So David made extensive preparations before his death.” (1 Chron. 22:5) Everything that Solomon would need to build the temple was sitting waiting for him when the time came to get started.

Have you ever had the heart for something, but for whatever reason found yourself unable to actually accomplish what you wished you could?

For example; one of the godliest women I have ever known was the grandmother of a friend that I grew up with. She had an incredible heart for missions and would have, no doubt, served as an international missionary had her husband also felt this calling. He didn’t.

Instead of having a negative attitude about the situation or trying to manipulate her husband into becoming a missionary, she did what she could. She raised a child who became a missionary pilot in Africa, she constantly was gathering money, clothes and any other resources that she could to support people on the mission field and I was never in her house when she was not in the process of hand-making a quilt that would bless a missionary family. (Even when her fingers were so riddles with arthritis that she could not even uncurl her hands.)

Sometimes, God will say to us what he said to David; “You have the right heart, but you are not the right person.” What that may mean for us is that our ministry is to set someone else up for success. We will find that by obeying God, we are even more effective than we would have been doing it ourselves.